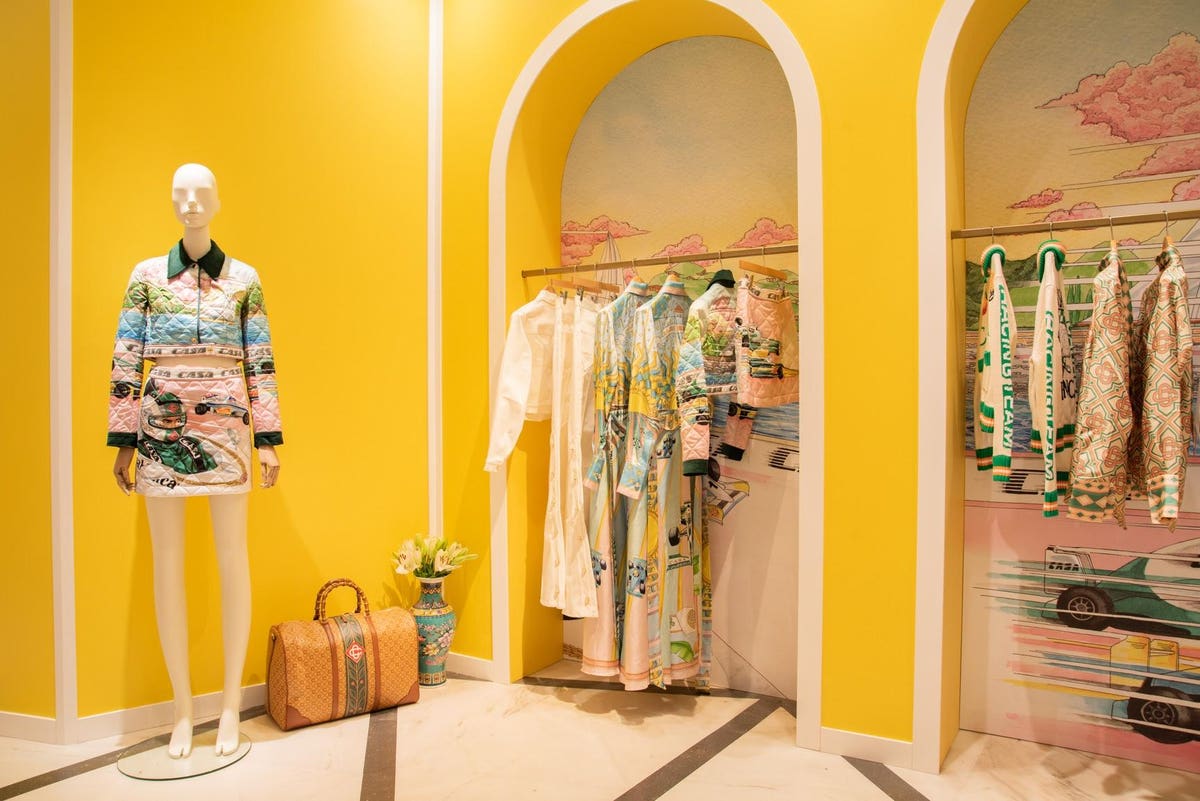 Charaf Tajer’s luxury streetwear brand, established two years ago, has nothing to do with Casablanca Records. The American music label boasted of Donna Summer, The Village People, Parliament and KISS during their record-breaking heyday of the 1970s. Tajer’s line evokes the vibe of that era, particularly evident through the sticker design of the vinyl records. Record label founder Neil Bogart channeled the film Casablanca with a disco touch, representing a desert casbah, invitation to the exotic city. This is the kind of place where Tajer could imagine his cast of unique characters for the brand reminiscent of bygone days. The fashion brand demonstrates an aesthetic that most identifies with the Jet-Set lifestyle popularized in the 70s and 80s. Tajer delivered a brand with a nuanced look just when the market demanded it.

The original Parisian Tajer did not aim to become a fashion designer. Growing up in Paris with a passion for architecture and classic French designs from Chanel, Hermès and Yves Saint Laurent, Tajer found himself in the nightclub world as the owner of the Pompom, a popular Paris joint from 2010 to 2019. The club represented a world Tajer aspired to during his formative years. “I have always aspired to enter the best private clubs, tennis and country clubs, all those places that were exclusive and inaccessible to me,” he recalls. “I loved how they dressed, in polo shirts and tracksuits with Hermès scarves and Cartier glasses. I loved the culture behind it all, ”he recalled, naming style muses such as Brazilian singer Jorge Ben or Aristote Onassis. The club allowed him to build a community.

This community was an integral part of his first foray into fashion with Pigalle, a streetwear brand, where Tajer worked from 2009 to 2017. “Pigalle was a school for me. Casablanca is an invitation to travel and discover different places and cultures, ”he said. (The brand was named after the famous town where his parents met.) The connections and community he built through Pigalle and Le PomPom helped him put his fashion classes to the test when ‘he launched Casablanca. With 3,000 euros and a concept, he set up a showroom in his mother’s apartment. The first season he sold to Browns, United Arrows, SSENSE and Maxfield LA. “I was fortunate to have friends in the fashion industry who were willing to give me a chance,” he noted.

“With Le Pompon I ran a brand and a nightclub, I decided how to create a community, the look, feel and experience of the club was so important to me. It taught me how to create and develop branding, “Tajer said, stressing the importance of aesthetics.” It’s what connects you to people. At Casablanca, we have the same mindset, meticulous with details in all aspects of the brand. ; I think this has enabled us to do so much in three years. They’ve already gone from a line for men to women and accessories. A new line of bags is launched for fall 2021.

They also achieved the coveted fashion collaboration, entering the second partnership with New Balance. “With New Balance, we’ve always sought to challenge the notion of what a sneaker is, creating some truly unique styles.” Before Casablanca, he was fortunate enough to collaborate with trendy names such as the Off-White X The End collection, Nike X Pigalle and Supreme through design work and other forms of advice.

With Casablanca’s modest financial beginnings and rapid growth, it’s easy to see how 2019 and 2020 marked a 100% increase over last year. Even with strategic retail partners, like many, Covid-19 has helped bolster their DTC and e-commerce efforts by helping to grow their community. “Casablanca has a loyal customer base all over the world and our wholesale partners are important to us; without them we would not be where we are today. Namely, Selfridge’s in London and Saks Fifth Avenue have dedicated a Casablanca boutique in stores with elaborate decors.

It then targets China and the Central and South American markets. And the industry is also watching; Kenzo is rumored to be in talks with Tajer to replace former art director Felipe Oliveira Baptista. Casablanca’s frenetic pace has proven that it is not just a mirage in the desert, but rather a brand determined to mark the fashion landscape.

Afghan families arrive in area “with just clothes on their backs”